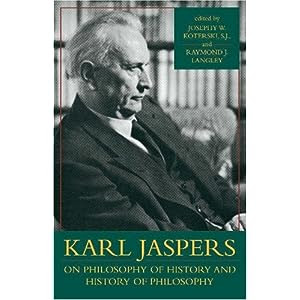 I chanced upon the book, Karl Jaspers on Philosophy of History and History of Philosophy edited by Joseph W Koterski S.J and Raymond J Langley, published by Humanity Books, couple of days back in Anna Centenary Library, Chennai. By the way, this library is a fabulous place to visit if you are a book lover.

This book offered a decent introduction to the philosophy of Nagarjuna, arguably India's most well known philosopher. He lived in the 2nd/3rd century CE in what is today Andhra Pradesh in India. Buddhism was undergoing a lot of changes then. Mahayana was being born from the earlier Hinayana version. Nagarjuna developed a thorough Buddhist dialectic to present the thoughts of the Buddha, which influenced scholars from around the world. Nagarjuna's Madhyamaka school of Buddhism (the middle way) paved the way for Ch'an and Hua-yen schools of China, the Zen tradition of Japan and the monastic philosophy of Tibet.

The two articles in the above book dealing with Nagarjuna are:

Karl Jaspers started studied the various philosophies of the world and published a book, "The Great Philosophers" in 1957. In that book, Jaspers considered three types of philosophers.
The typical western logic considers only two states: A statement is either (1) True or (2) False. However, Nagarjuna, following Indian tradition, was considering four different states: A statement is (1) True (2) False (3) Both True and False or (4) Neither True, Nor False. Malcolm Eckel adds that at times Nagarjuna was also considering (5) None of the above!

Jaspers saw Nagarjuna as a representative of the extreme possibility of transcending metaphysics by means of metaphysics.

Nagarjuna acknowledged the inadequacy of all speech and developed a precise logical procedure to examine all possible categories of thought and to demonstrate that none of them have ultimate validity.

Nagarjuna's view was that it was impossible to teach about ultimate truth without depending on the categories of conventional truth. The understanding of emptiness is the goal. But ultimately it is no understanding and no goal.

Eckel compares Nagarjuna and Nietzche as below:

Both prevent a person from coming to rest in any single position and both are meant to bring about a form of liberation. But both have different aims. One aims toward nirvana and the will to salvation; the other toward the will to power and the superman.

There was a nice summary of Nagarjuna at the end of Eckel's article, which I quote in full:

According to Jaspers, "Buddhism never resorted to violence, never forced any dogmas on anyone. Buddhism had no religious wars, no inquisitions, and never engaged in the secular politics of an organised church." Not only is this questionable historically; it is questionable theoretically. The master-narrative of the bodhisattva practice in which Nagarjuna's dialectic is placed, is to a large degree a narrative of power. Bodhisattvas are concerned about gaining all sorts of "masteries" and "powers" not only over their minds and bodies, but over minds of bodies of others. These masteries culminate in the figure of celestial bodhisattvas such as Avalokitesvara who are endowed with all the powers of Hindu gods. The will to power and the will to engender a superman (albeit of a rather different kind) are not far away from the system of values and practices that encompass Nagarjuna's dialectic, and both were given concrete expression in the struggle for power between different monastic communities in china, to say nothing of the fascination with power in all its modes that lies behind the practice of Buddhist tantra.

Bolsey summarises the philosophy of Nagarjuna according to Jaspers as below:

Insofar as this method of refuting every assertion of being or nonbeing is represented as universally valid, we have before us a doctrine. As such it has been called negativism or nihilism. But this is not correct. For what this doctrine seeks is an authentic truth which cannot itself become a doctrine. Hence, all its operations end in paradoxical statements that cancel each other out and so point to something else: "The Buddha says: My doctrine is to think the thought that is unthinkable, to practice the deed that is un-doing, to speak the speech that is inexpressible, and to be trained in the discipline that is beyond discipline.

There is plenty of material available online on Nagarjuna's philosophy, if you look around.

Posted by Badri Seshadri at 2:43 PM No comments: