A bit of Andhra History in Mylapore

R. Venketesh, author of Gods, Kings and Slaves: The Siege of Madurai took around 100+ of us today morning on a walk around a few streets of Mylapore. This was organized as part of Mylapore Fest organized by Vincent D'Souza of The Mylapore Times. We started at the Nagesvara Rao Park, moved to Andhra Mahila Sabha Hostel, then to the 16th century Luz Church, Nagesvara Rao's home, Mylapore Club, Ranade Library, what was Kamadenu Theatre, place where Krishnaswamy Iyer's house was, Luz House associated with Buchi Babu, Vidya Mandir school and Buckingham canal near Kutchery Road. 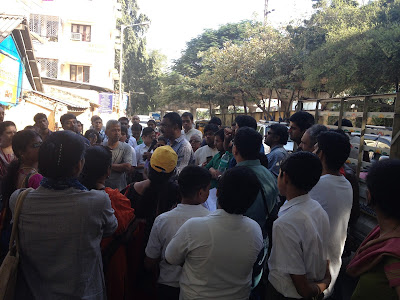 Two places are of key interest and I will talk only about them. One is the memorial for Potti Sriramulu, right outside Vidya Mandir school. Potti Sriramulu, a Gandhian sat on fast for 56 days asking for a separate state for Telugus and died on 15th December 1952. Riots broke out in the Telugu regions of Madras Province and in the Madras city itself. Jawaharlal Nehru was not in favour of linguistic states and had dismissed Potti Sriramulu's fast, but when the news of death reached him Nehru panicked and announced the formation of Andhra Pradesh comprising Royalaseema and Coastal Andhra. A memorial exists in the building where Potti Sriramulu died and it is called "Amarajeevi Potti Sriramulu Memorial House". It carries a board in three languages: English, Telugu and Tamil. 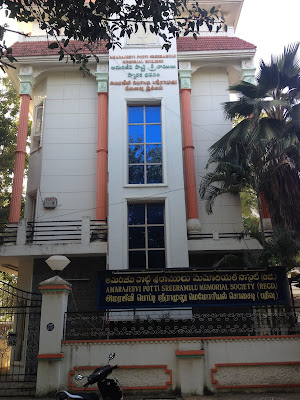 The fight for the formation of a separate state for Telugus is much older. An informal pact was worked out in the building where Amrutanjan offices now are (Luz Church Road). This is where the leaders from Royalaseema and Coastal Andhra met and came to an unwritten pact, that one part will get the capital and the other part its High Court. 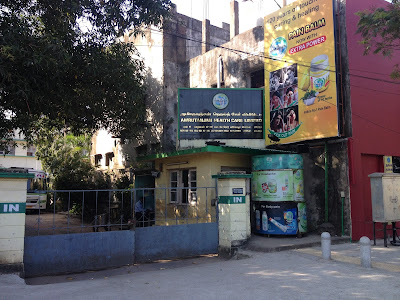 Though Kurnool initially became the capital of Andhra, when Telengana, annexed from Hyderabad Nizam was combined with this entity, Hyderabad instead became the state Capital and the seat of High Court.

Now, we do have two states once again, and a new capital for Andhra is going to be constructed at Amaravati. Fair bit of Amaravati's treasures are in the Chennai Museum (including the great 'Subjugation of Nalagiri' medallion) while the rest are in the British Museum.

[An article I recently wrote in Swarajya on When Tamil Nationalism Turned Against Telugu Speakers Of Tamil Nadu
My two earlier articles on caste and politics in Tamil Nadu for Swarajya:
DMK’s Son Set? Tamil Nadu Will Likely Back Jayalalithaa Again
Caste Realities Unlikely To Change Any Time Soon]
Posted by Badri Seshadri at 11:46 AM No comments: